Ok, I originally had a much more expansive review written out which described the whole plot and every joke. I’ve just deleted that in favour of just explaining why you all should go watch The Boxtrolls. Usually I don’t bother writing reviews, but I think this year has been lacking so far in quality animation and I feel that this film may fall through the cracks.

It’s another Laika production ( the amazing Paranorman and Coraline are also in their belt) and also in stop motion. Each film seems to progress technically by huge leaps, Paranorman was more advanced than Coraline and The Boxtrolls is more advanced again! 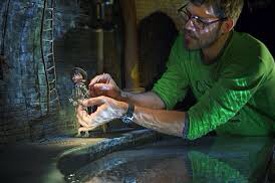 Lookit that lighting effect! It’s gorgeous! There’s also quite a lot of crowd scenes throughout the film which are done pretty amazingly, there’s a dance scene where I was especially impressed.

As well as having style the film also has a lot of substance. All the characters are extremely loveable (even the bad guys, who often question their own morality in a comical way) the trolls themselves remind me a lot of the Wombles mixed with Wall-E with a little bit of despicable me minions thrown in. They’re actually delightful! The trolls sneak out at night and collect peoples thrown away goods ( like the Wombles) and fix it or take it underground to their sewer to invent things with. (Like Wall-E). The main character, a human boy Eggs (the trolls are named by whatever is on their boxes) is raised by the troll Fish. The time lapse scene from Eggs going from a baby to a boy is lovely to watch and rivals that of Simba from the Lion King definitely. If I can’t sell enough how adorable the trolls are, when they go to sleep they stack up in a big cube and hide in their boxes!

Of course there’s a bad guy in the film, Mr Snatcher and his cronies the red hats who desperately wants a white hat to improve his stature and be allowed to eat cheese with the other white hatted men. The only way he can obtain the White hat is by lying about the Boxtrolls and offering to exterminate them so he’s seen as a hero amongst the town. Wait till you see this man eat cheese! The town is obsessed with the stuff, it seems a currency in it’s own right. There is an undercurrent flowing through the film that everyone has the chance to change their nature, the Boxtrolls don’t have to hide and be scared and the bad guys don’t have to be bad. The film also points out that what you wear doesn’t change who you are, Mr Snatcher getting a white hat wouldn’t change the fact he isn’t a hero and doesn’t fit in with the white hats.

I’ll stop gushing in a moment but the voice acting is wonderful (Ben Kingsley as Snatcher especially) and the comedy is spot on. Wait till you see Snatcher’s alternate personality and his attempt at a cheese tasting party. Go watch it!!!!

One thought on “Boxtrolls…A review!”